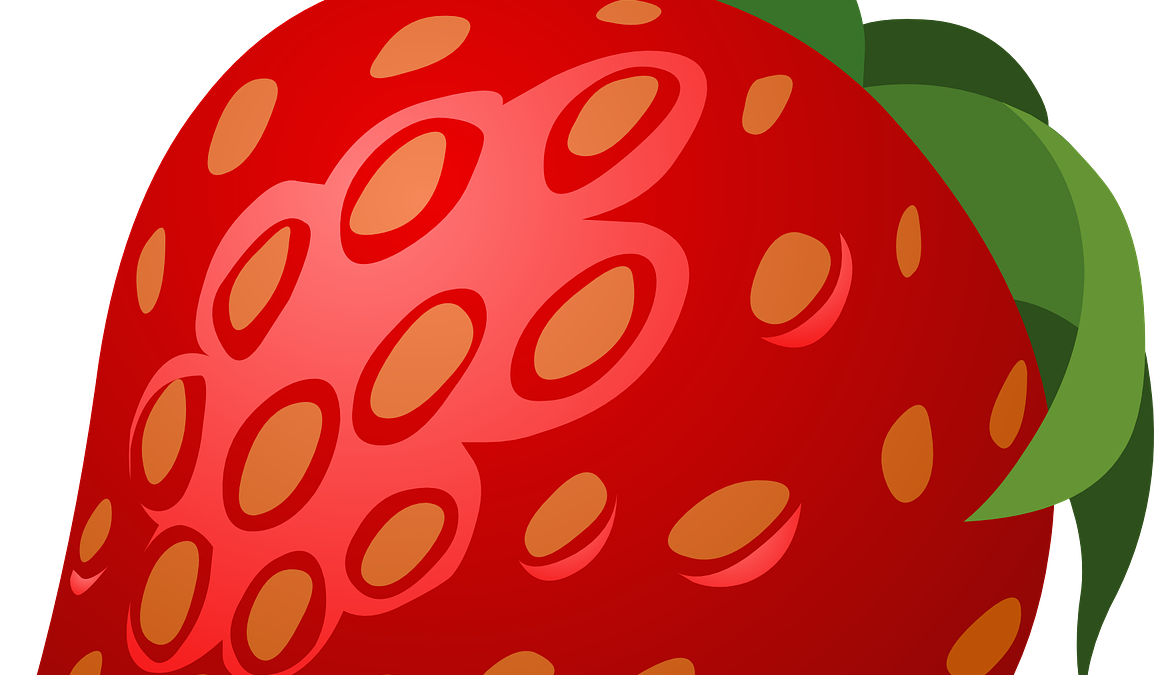 The 1980s from the eyes of a child, was a storm of colors, trinkets, stickers, headbands, toy figurines, fringe, plastic bracelets, Garbage Pail Kids, and shimmery cheap nail polish. In my first small memoir collection I called it a cavalcade of neons, or something to the effect of fluorescent thunder.  As a kid I loved sticker collecting, and the favorites were always the Trend Matte scratch and sniff kind. My friend Erica, my neighbor Karen, and my friend Carrie were among a few of my peers that shared the same hobby. We loved seeing, touching, scratching, and reveling in their amazing abilities to hold their scents: the roller skate leather, the black licorice records, and the lemon-soap rainbow.

My favorite sticker from the classic Trend Matte scratch and sniff collection, by far, was the plump strawberry with the word Berry Good across its cheeky middle section. My second favorite was the pizza slice, titled Hot Stuff, and in third place, the set of two bananas exclaiming Appealing. The Melon Power watermelon slice and the chocolate ice cream cone, Super Scooper were next in line. It mattered because if I owned only one of them, it wasn’t enough. We’d trade and wait. Trade and wait. These stickers repped the 1980s with both fragrance and style—nothing was subtle about them, and nothing was graceful. All slap, punch, and “here I am!”

I think those scratch and sniff stickers by MATTE were essentially the first emojis. The colorful, touchable likeness of something that smelled and stood out as something you wanted to represent yourself by choosing it as an expression. “Oh! Elaina loves that Strawberry” “You have the jelly on bread? Rachel really wants that one.” “The roller skate is the only one Teresa wants!” That kind of thing.

There was a fruit-essence about being a kid in the 1980s. Everything smelled like fruit. Or looked like it smelled like fruit—jelly bracelets, jelly shoes, neon hair bows, chunky earrings and anklets, and most of our lip glosses hidden in the plastic representations of an orange slice or a strawberry. Those lip glosses had ropes so they could double as necklaces. Even our fat shoelaces held specks of citrus limes and yellows. Kid-dom in the eighties bursted with a color joy that can only be compared to having a fresh thick sheet of white construction paper, a brand-new box of crayons, and sharp pencils at your desk. No homework. Just a fresh, clean canvas, and there you’re off to create the prettiest rainbow you’ve ever seen on paper. The smell of wax on palms like a sacrament.

In the Ocean County Mall was a retail store, nestled between Jo-Ann’s Nuthouse and probably a clothing store like Copper Rivet, called Pandemonium. God, what I would pay to see a photo of the interior of Pandemonium right now, circa1986. I’d pay someone a hundred bucks to see those glorious thick roles of stickers dominating the ceiling and tickling our faces as we browsed. It was a sight to see—-a variety store streaming with literally dozens of rolls of stickers hanging around the register area in the center of the store, serving as the main attraction, and as decor. Rolls of stickers in the categories of hearts, oily unicorn heads, bananas, glitter stars, Hello Kitty faces, candy, music notes, pretzels, teddy bears, and on and on until your heart could explode confetti in the best of ways. On the floor were displays of journals, pens, erasers, Hello Kitty everything, wallets, and more stickers. Sticker books, stuffed unicorns, headbands, rainbow notebooks, and neon coin purses were displayed at every turn. Wow, the unicorn really was the mascot of the early eighties, wasn’t it? This store was simultaneously a heaven and a hell for the olfactory and visually sensitive person. It made me happy more than not, that’s what I remember. Any spare change I had from birthdays or Christmas, I spent here or at the record store. I remember spending at least thirty minutes just ogling before I chose my sticker or two from the rolls, and then deciding that my strawberry-gloss scented headache was the bane of my eight-year-old existence, and it was time to eat a Hot Sam pretzel to settle my stomach.

I grew up in New Jersey where large buildings were leased or purchased on major highways for hundreds of vendors to rent space the size of a bathroom and sell their items. Man their booths. Two come to mind—the Rt 18 Indoor Flea Market in Old Bridge and the Rt 9 Indoor Flea Market in Howell. In my kid memory there were hundreds of vendors, but my guess is that dozens is the more accurate unit of measurement. We’d often go on a Sunday morning, and we’d bundle up since it was cold concrete indoors with only space heaters in the booth areas. My dad always seemed to be on a mission to find toys from his childhood or Hess trucks when they were a hot collectible item. I was on the hunt for the latest Jordache purse. I’m pretty sure I owned a royal blue one, but what I really wanted was a hot pink one, hoping the flea market would have the affordable Jordache purse waiting for me one any given Sunday. Only, I don’t think it ever happened that way. They’d have white or green, but not hot pink in stock, and it wasn’t for not arriving early enough. My dad is known to open places. First ones there, or at latest, second. If you’re on time, you’re late.

The other place I remember being enamored by as a kid in a very prompt Italian-American family was Freedman’s bakery near my house on Rt 166. We’d go for a loaf of rye bread, and maybe my brother and I would be allowed to choose a doughnut on a Saturday or Sunday morning. Freedman’s shared an entrance with the Dover Pharmacy. Both places were delights for me—shelves of candies and breads and a back wall of school supplies. Arrays. I love neatly merchandized arrays. I enjoyed the likes of shoe stores, candy in drug stores, Smurf villages, and as mentioned earlier, the glory of Pandemonium.

The General Store was one of my family’s favorite stores to browse when I was younger. On a random Saturday or Sunday afternoon, during the gloom of March, or the promising locust-sprouting days of early spring, we’d hop in the car and drive fifteen minutes down Brick Boulevard to the stand-alone store called The General Store. It wasn’t really a general store in the traditional sense. They did sell stick candies of many flavors—striped limes, root beer twists, watermelon, orange, and on and on through the fruits and mints and spicy licorice blends. Right when you walked in the store was an old-fashioned calliope which by definition: a keyboard instrument resembling an organ but with the notes produced by steam whistles, used most commonly in traveling fairs, carnivals, and on boats. The small candy shop, lined with glass jars and described up top was to the left down a long hallway, and then finally, the store itself.

The store was so disjointed in brand identity, yet so rich in setting. The General Store was like more than a store from where I was standing. It was sort of compartmentalized like a magazine  with well-sectioned-off vendors, but overall, it made sense. The entire center of the store was comprised of clothing racks, yet the perimeter was a mix of housewares, linens, and miscellaneous gifts like candles, holiday dishware, and kitchen gadgets . It felt like a creative outing every time we went. Or maybe I was just that much of a quirk-kid. I loved the neatly sectioned off areas, and the clear boundaries between the cookie jat corner and the painted glass and vases. I remember a very stealth candle section too. There were colors everywhere. Smells everywhere, for better or worse. Music from old days—now I know it was Ella Fitzgerald, Billie Holiday, and Louis Armstrong. Sometimes Dizzy Gillepsie, Lena Horne, and Frank Sinatra. It felt like a field trip too. “Look to your left, and admire the country-farm inspired tablecloths, merchandized with glass butter dishes and teeny, tiny silver spoons.” “To your right, you’ll notice hand-woven sweaters, knitted in alpaca wool and made in Sweden.” I miss that General Store and our random weekend trips. We’d get in the car afterwards with a feeling of “we just did something satisfying with our Saturday” even if we bought a small magnet in the shape of a macaw parrot. We strolled and we browsed, often for gifts, and sometimes as a hobby.

Much later in my childhood, now venturing into puberty-plus territory, I was completely head over heels for Vogue magazines. In any ways, my fashion magazine habit replaced the sticker collecting. It was the new visual-artifact component of my life. Feeling renewed creatively over photos of garments that I’d never wear, but identities I could plug into my psyche for the rest of my womanhood.  The way the models bent and posed gave me this feeling that it was okay to express myself in different ways, from my button-down shirts to my chunky boots with sundresses. I remember imitating a model with her shoulder length hair, slicked back, more on the masculine bend. Her dress was long and fuchsia, split down the middle, with only two pieces of fuchsia covering her breasts. I couldn’t duplicate the outfit, but there was an attitude and a bravery about her stance: “I’m long, covered in coconut oil, and I live on the islands of Moon River. I only eat dragon fruit, and I can outrun you.” She looked like she ruled the universe and no one could get in her way, yet she still seemed kind. I wanted to be her. Then other Vogue pages felt softer and like something more powdery and old: “I live in a ballet pink cottage of the coast of Maine, and I make saltwater taffy in heels.” I wanted to be her too. If only those pages weren’t drenched in strong perfumes. Even so, I bought them when I could, and flipped through them with eagerness all through high school. Sometimes, I’d rip pages out if I felt the photography spoke to me loud and clear, and I’d tape in on my bedroom wall, despite my Dad’s insistence that the paint would peel and I’d destroy everything they worked hard for over the years. I required color. I required atmosphere. I required colorful chaos to quell the inner sensory chaos, so that in turn, the meld left my brain chemicals with balance and calm.